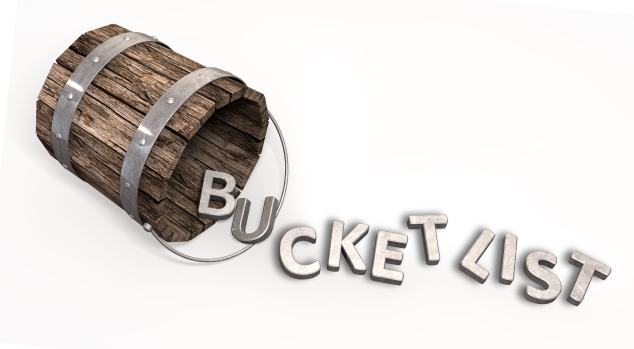 A drop in the bucket, slime bucket, sweat buckets, come down in buckets, kick the bucket….and finally, wait for it: bucket list.

Bucket idioms have been around for centuries, and now it’s the bucket list that is all the rage—for all ages, not just seniors.  Bucket lists are ubiquitous.  So, if you need inspiration, just check out the list of 10,000 things to do before you die.  Lists have been concocted for visiting foreign countries and big cities, for particular seasons, and even for cooking new recipes.  Google at will.

The term appears to have originated with, or at least been popularized by, the 2007 movie The Bucket List, which starred Morgan Freeman and Jack Nicholson.

Wow, who knew that 90 percent of people over-55 have already created a bucket list?  That’s what surveys say.  Okay, most of us oldies have an idea of some things we might want to do before kicking the bucket, but are those ideas realistic?  Let’s take a look at some common online ideas.

Defying gravity seems to be very popular.  Our movie stars, Morgan and Jack, had skydiving on their bucket list.  However, they also had stunt men.  We were very impressed that the first President Bush parachuted to celebrate his 90th birthday.  But, he’s a longtime skydiving fanatic.  If skydiving or other feet-off-the-ground adventures like parachuting, paragliding, or parasailing make your list, we suggest a tandem jump with a professional as Bush did.  We also suggest you update your will and have your life insurance paid up.

A hot air balloon ride makes many lists and seems to us a reasonable way to get high without… well…getting high.

A tattoo?  Nope. That ship has sailed for us oldies.  Sagging skin is not the best canvas for tattoo art.  Just get a temporary one.

Of course, traveling the world and eating exotic foods is popular limited only by bad backs, knees, and hips; planter fasciitis; and medical issues…such as GERD.  You get the idea.

Many bucket lists tout running a marathon, learning a new language, writing a book, or taking music lessons.  Really?  And, you have waited until now because?

Conquering a fear lands on many lists.  And, there are such creative names for these phobias.  Fear of spiders—arachnophobia.  Claustrophobia—fear of small, confined spaces.  Fear of heights—acrophobia.  Fear of rats plays a huge part in the novel 1984.  Even that phobia has a name—musophobia. We prefer to think of bucket list items as fun and adventurous objectives.  We are happy to die with some fears.

Scuba diving sounds exciting; but, sadly, we’ve pretty much missed the Great Barrier Reef, which is fading fast.  And…questions: are you willing to don a bathing suit?  Can you swim?  Are you willing to come face to face with sharks, giant squids, electric eels, and flesh-eating bacteria?

Going on a cruise is quite doable but potentially fattening.  Prolific food and drink.  But, beware of Legionnaires’ disease and leaning too far over the railing if you’ve had a few or irritated your partner.

A new study reports that, on average, oldies are willing to spend about $13,000 on their bucket lists.  Looking at lists online, we don’t think that would cover visiting all seven continents, highlighted by an elephant ride in Thailand.  But, you could visit all 50 states, see the Northern Lights, learn to crack an egg with one hand, swim with a dolphin (in a wetsuit, please), go on a whale watching tour, or plan for the next total eclipse…all popular choices.

Pity our kids.  With life expectancy rising each year, they could be working forever.  Heck, one in 10 oldies now say they will have to work until they are over 71.  Expect future bucket lists to include…retirement!

So, our wrinkled wisdom for today?  Creating bucket lists can be fun, but maybe start waaay before you might actually kick the bucket.  Hear that young people?  And, think realistically.  Heck, there is always virtual reality and you don’t even need to get out of bed.  Give it a Google.  And, since some degree of memory loss is a fairly common part of aging, be sure your bucket list is on your smartphone, lest you forget.