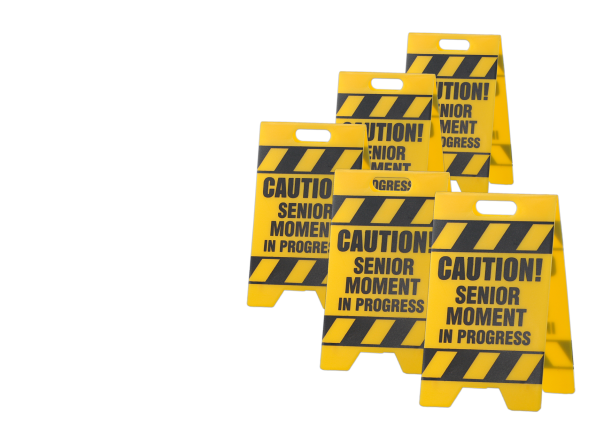 What was the point I was about to make?  Did I close the garage door?  Lock the car?  Why did I come into the kitchen?  Ah…we label these senior moments.  Is dementia or Alzheimer’s just around the corner?  Nope.

Let’s get real.  We’re oldies.  Our brains change, making it more difficult to dredge up certain facts or memories.  The hormones and proteins that repair brain cells and stimulate growth have begun to decline.  Age-induced forgetfulness is normal just like bad knees, sagging skin, and cataracts.

We oldies have probably brushed our teeth 50,000 times and closed our garage doors 40,000 times.  These repetitious activities are now automatic.  We are often thinking about something else while doing them…like…shall I listen to classic rock or jazz on my car radio?

Reality monitoring is a term used to describe focusing on common activities we do so frequently that we have difficulty remembering if we actually did them.  A reality check is easy, we’re told, because the actions we perform leave behind memory records that are different from actions we think about.  Okay, if you say so.

But, we do like the concept of reality monitoring to help us determine which repetitive activities we most frequently fail to remember.  Once identified, develop a ritual.  We put our seatbelt on as the garage door clatters down.  Done.  No worries.  Garage door closed.

It’s not just us oldies.  At any given age, we’re improving at some things and getting worse at others.  The brain’s processing power and detail memory peaks at age 18, according to research.   The ability to learn unfamiliar names peaks at age 22.  And, facial recognition peaks at 32.  Okay, we think we feel better now.

Research also found that people of all ages often forget who someone is and personal details about them.  And, forgetfulness isn’t limited to someone we’ve just met.  We forget acquaintances, coworkers, classmates, and friends.  We forget shared experiences.  Most younger people excuse the “forgetter;” but, apparently, the individual loses points in a dating relationship.

Oldies are even more forgiving because, well…been there, done that.  Plus, we’ve probably already forgotten what you told us.

And, we found this interesting theory called memory decay.  Hmmm.  How appropriate.  We know something but can’t retrieve the information.  The reason?  We don’t use the information regularly.  Yes, we once knew who sang Raindrops Keep Fallin’ on My Head.  Storage of new information is also believed to interfere with recalling older information.  Never did “use it or lose it” make more sense!

We’ll close with one of our favorite lines we often quote to each other walking out of a store after shopping.  It’s okay to forget where your car is parked.  It’s not okay to forget what your car looks like.  Another reason to value handicapped parking.  It’s close in.  Makes it easy to spot your car!

Our wrinkled wisdom for today:  Write yourself notes.  Don’t be naïve.  You won’t remember in the morning.  Same with New Year resolutions.  Did we break them or just forget what they are??  Have a place for everything and everything in its place.  Don’t overdo it.  But, put your keys in the same spot when you walk in the door.  Have fun playing word games and online bridge.  Do crossword puzzles and Sudoku.  Great for keeping that aging brain with it.  Pay attention to each action you perform even if you’ve done it tens of thousands of times already.  And, remember that you said you would never drink that much again…ever again.

One thought on “Senior Moments”